Every day I receive emails and comments from people who are legitimately afraid of the End Times.

While I’ve recently touched on why people need to get serious about getting right with God, Christians needn’t be afraid of the End Times – we’ve read the back of the book. We win.

With that said, let’s just jump into today’s question:

Question: People are saying that Jesus is coming because of some “signs”. Can somebody debunk this? It’s really scaring me.

2. Why would Jesus coming back make you afraid? Seriously, as a Christian, why would you be afraid of Jesus returning to establish His Kingdom here on Earth?

“He will wipe away every tear from their eyes, and death shall be no more, neither shall there be mourning, nor crying, nor pain anymore, for the former things have passed away.” – Revelation 21:4

Does that sound scary to you? Jesus getting rid of all the evil and making it like it was in the Garden before Adam ate of the fruit? No pain, disease, death? Why would this make you afraid, rather than excited?

False Teachers Prey On Your Ignorance

I said it in September 2017 when people were worried that the world was going to end on the 23rd, and I’ll say it again – until the Temple is rebuilt in Jerusalem, at minimum, the countdown to Jesus’ return cannot begin. And once it’s built, which it isn’t at the time of this answer, we have three and a half years of “peace,” and even then, Jesus still has more time. Jesus is still years from returning once the Temple is rebuilt. 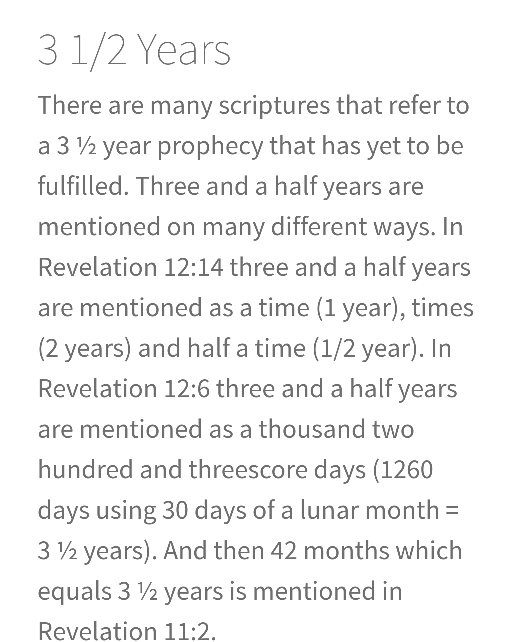 This is the EXACT reason the imminence doctrine that is so popular with pre-trib ministries such as Calvary Chapel (their radio program, Pastors’ Perspective, teaches this doctrine) is UNSCRIPTURAL!

(Imminence doctrine states that Jesus could return at any moment, even before you finish reading this answer.)

Not only that, Jesus Himself told us what signs to watch for, and told us that like the first blooms on a tree signal that Summer is near, so too do these specific signs signal that Jesus’ return is near.

“29 Immediately after the tribulation of those days the sun will be darkened, and the moon will not give its light, and the stars will fall from heaven, and the powers of the heavens will be shaken. 30 Then will appear in heaven the sign of the Son of Man, and then all the tribes of the earth will mourn, and they will see the Son of Man coming on the clouds of heaven with power and great glory. 31 And he will send out his angels with a loud trumpet call, and they will gather his elect from the four winds, from one end of heaven to the other.

32 “From the fig tree learn its lesson: as soon as its branch becomes tender and puts out its leaves, you know that summer is near. 33 So also, when you see all these things, you know that he is near, at the very gates.” – Matthew 24:29-33

No Tribulation Yet = No Rapture Today

Has the great tribulation happened yet? No. Has the sun turned dark? No. Therefore, don’t fret!

Also, ALSO, any prophets whose prophecies do not come to pass are false prophets. They misattribute their own desires as the promptings of the Holy Spirit. STOP LISTENING TO THEM.

The Real Reason Why You Fear Jesus’ Return

It’s safe to assume that the real reason people are afraid of Jesus’ return is because they know that they’re not strong enough in their relationship with Christ to stand up to peer pressure to take the Mark of the Beast.

Deep down, most so-called Christians know that when hard times come, they’re going to be like the seed in Jesus’ parable that falls on rocky ground.

“11 Now the parable is this: The seed is the word of God. 12 The ones along the path are those who have heard; then the devil comes and takes away the word from their hearts, so that they may not believe and be saved. 13 And the ones on the rock are those who, when they hear the word, receive it with joy. But these have no root; they believe for a while, and in time of testing fall away.” – Luke 8:11-13

Will You Be Apart Of The Great Falling Away?

Jesus already told us that there would be a great falling away of people from the church, prior to His return.

“Now concerning the coming of our Lord Jesus Christ and our being gathered together to him, we ask you, brothers, 2 not to be quickly shaken in mind or alarmed, either by a spirit or a spoken word, or a letter seeming to be from us, to the effect that the day of the Lord has come. 3 Let no one deceive you in any way. For that day will not come, unless the rebellion comes first, and the man of lawlessness is revealed, the son of destruction, 4 who opposes and exalts himself against every so-called god or object of worship, so that he takes his seat in the temple of God, proclaiming himself to be God.” – 2 Thessalonians 2:1-4

Clearly, if these four signs haven’t happened yet, Jesus’ return is not just around the riverbend.

Other Signs Related To Jesus’ Return

There are other signs taking place that were necessary to come into fruition before the events in 2 Thessalonians 2:1-4 can take place – and these signs have and are taking place today. Obviously the biggest sign is that Israel became a nation, which it did in 1948. That set the ball rolling for all the other future signs to begin, which they have.

Get Real With God Before It’s Too Late

If you’re worried about not being strong enough to face trials and tribulation, which Jesus promised us, it’s time for you to get your prayer life in order today.

“I have said these things to you, that in me you may have peace. In the world you will have tribulation. But take heart; I have overcome the world.” – John 16:33

Get your relationship with God in order before you’re overtaken by tribulation and you fall away: